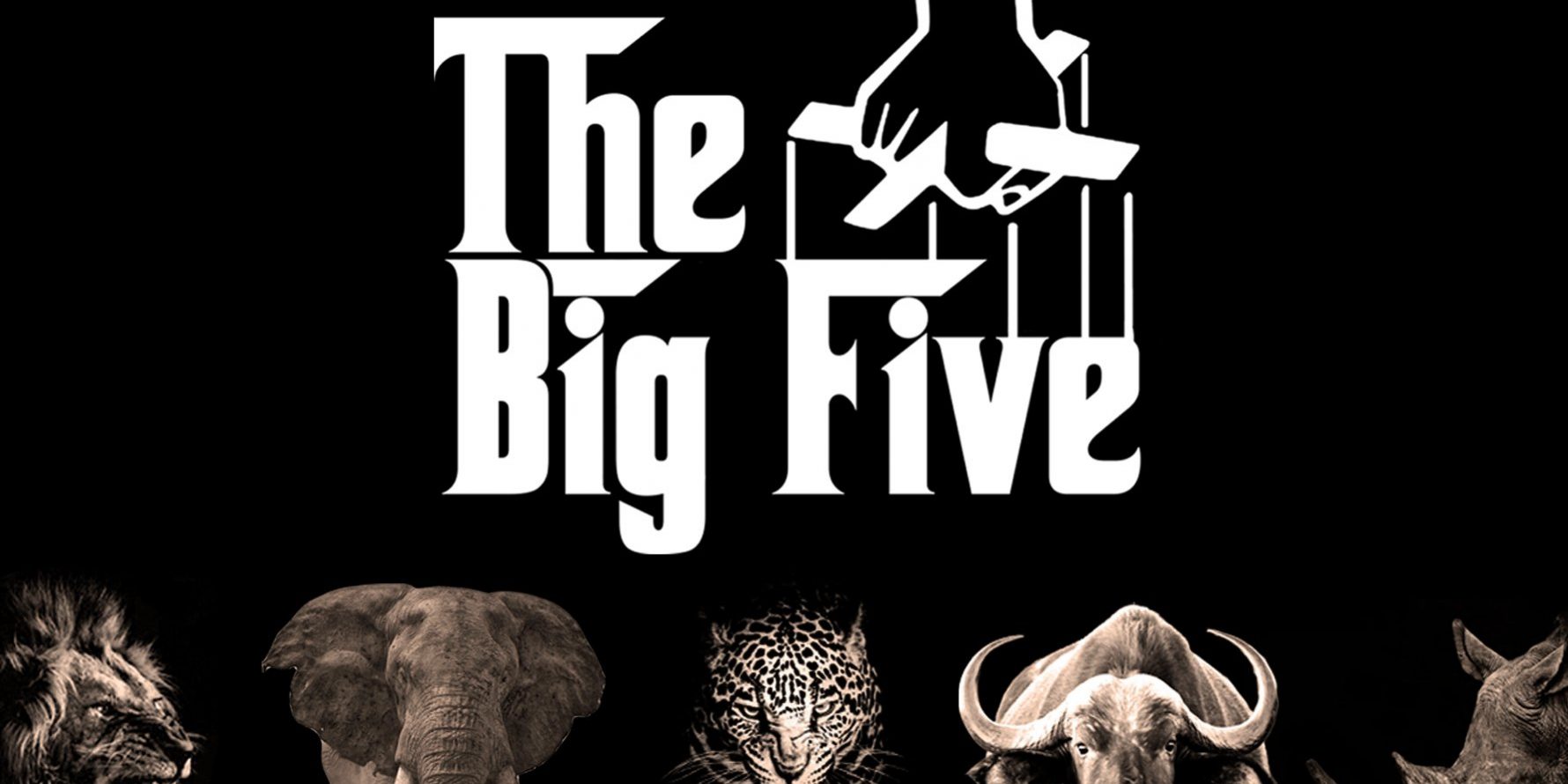 Safari Guide - How to Survive An Attack

Traditionally, the term ‘Big Five’ is rooted in colonial times and described Africa’s five fiercest animals to hunt, namely the Cape Buffalo, African Elephant, Rhinoceros, Lion and Leopard. Today, travelers are more likely to encounter these enigmatic creatures on a photographic safari under the safe supervision of experienced guides. And while most safaris are safe (particularly in Botswana), anyone who has ever been in close proximity to the Big Five has no doubt wondered about survival protocol in the very unlikely event of an attack. What do you do if you’re ever confronted by one of the Big Five?

Surviving the Big Five is an interesting discussion, and in order to better understand what to do and not to do, we spoke with a number of expert guides in Botswana to get their advice, and some tips and tricks.

Remember that viewing the Big Five with a guide is a very safe experience. This list is more informative and aims to provide you with an idea of what people have done, and what can be done to survive a very unlikely attack by one of the Big Five.

Let’s start with the apex and get right into it. The golden rule for surviving a lion encounter is to stand your ground. If ever you were to come face to face with a lion outside of a safari vehicle, the first rule is, “Do not run”. Yes, this rule completely contradicts every ingrained reflex present in the human condition, and yet is continually saves lives.

“Lion attacks are quite rare, and those attacked by lions have by and large walked up to them or threatened them in some way,” says SK, a guide working in the Linyanti area of Botswana. “A lion or lioness will tend to growl at you before it starts a mock charge to test you. You must stand your ground and look that lion in the eye. It is one of the scariest things I have ever done in my life, but if you turn your back and run, the mock charge will turn into an attack.”

Rather try and make yourself look bigger than you are says SK, “Wave your hands around and shout at the lion, then back away slowly while never turning your back on the animal. When you’re a safe distance from the lion, over 50 meters, you can turn and walk slowly away. A change of pants will probably also be necessary.”

The San, or Basarwa people, often share swathes of land with prides of lion in the Central Kalahari Game Reserve which covers a staggering five million hectares of land in the middle of Botswana. The San have a number of tips and tricks for staying safe from lions. Majwagana “Scuppa” Tshururu, who works as a guide at Tau Pan Camp offers culturally sensitive insight into traditional San ways, such as where to set up your home in the wild. Pointing to a thatched shelter, Scuppa describes how traditional houses sit a particular side of a Camelthorn or Apple leaf tree, closed to animals on one side, open in another. “Lions stalk from downwind, even when an Oryx is lying down it faces downwind so that it can smell danger”, he says. “We make the entrances to our houses facing wind breaks so that so that a lion can’t get inside. After all, a lion cannot reverse”.

Although few San still live like this, his inherited expertise lives on here and offers travelers a responsible encounter with Botswana’s earliest culture – without the dress up.

Next up is the biggest member of the crew, and with males able to reach a whopping 4 meters in height (approximately 13 feet for our imperially inclined readers), this is not an animal you want to argue with. Elephants are also built like brick shithouses, and some males weigh in at over 6 tones (14,000 lbs.), most of which is muscle. Not only are they huge, but there are a lot of them, about 130,000 in the north of Botswana. They can also be alarmingly aggressive when surprised or confronted.

“Breeding herds with young calves are the most dangerous as the mothers are very protective over their young.” Says Nicholas Sheldon, lead guide for The African Wild. “However, you also need to watch out for bull and adolescent males on musth as they tend to be highly aggressive owing to excessive reproductive hormone production.” An elephant on musth is identifiable with swollen temporal glands behind the eyes that leak a sweaty tar-like secretion down their cheeks and into their mouths. These elephants also smell quite musky, and along with the breeding herds, special care should be taken around them.

So, what should you do if you go out for a walk and come face to face with a herd of elephant? “If you bump into an aggressive elephant while out on foot, the first thing you need to do is stay calm,” says Nicholas Sheldon.  “Elephants will often mock charge, and you need to show them you are not afraid. Shout as loudly as you can and flap your arms. Throw some sand into their eyes if you’re close enough. Most important, remember not to run unless absolutely necessary. Just stand your ground and show that you are not afraid, eventually the elephant will wander off to find something more interesting to do with its time.”

In Africa we have the Black and White Rhinoceros and it is not easy to spot either rhino in the wild. Poaching devastated the populations in Chobe and other places in Botswana. Although you can see them in certain parts of the Okavango Delta (mostly around Chief’s Island), the poaching threat has increased over recent years.

We asked a walking safari guide from the Okavango Delta to share some insight this extraordinary species. Thanks to an extensive repopulation program on Chief’s Island, this is the only place they roam freely in the wild outside of a sanctuary in Botswana. Amos Disho, a guide at Moremi Crossing Camp, has been walking this area for ten years and recommends the following, “Rhinos are very similar to hippo (another dangerous animal which mysteriously didn’t make it into the Big Five list). The best thing is to find a big log from a fallen tree trunk and shelter behind it. Rhinos have short legs and cannot jump. You can also hide behind a tree.”

While Black Rhinos are more aggressive than White Rhinos, both are relatively peaceful; one of the reasons that makes them an easy target for poachers.  “By and large they will leave people alone as long as they are left alone. Try not to get too close them if they have any calves (even in a game vehicle), as this is when they are most aggressive,” says SK, “If you do get chased, find a tree or a log and get out of the way.

When hunted, leopards are incredibly dangerous and unpredictable. Thankfully, they are rarely hunted these days (and those that do hunt them should probably reevaluate their life choices and consider penis enlargement as an alternative therapy).

On a photographic safari Nicholas Sheldon explains that, “Leopards should never be cornered. They always need a way out.”

Muzilla Gwizani from Kwando Safaris sees a lot of leopards in the private Kwara Game Reserve, which borders Moremi. He says that “leopards are mostly shy and prefer thick habitat. When you encounter any leopard, give the animal good space. If on a game drive, switch off the engine, minimize voices and assess the animal’s behavior. Avoid eye contact with the animal, as this could make it feel threatened”.

This is the biggest difference between this cat and a lion. If you come across a lion while walking in the bush, you should stand your ground and stare them down. With a leopard, you should back away and avoid eye contact which they might perceive as a challenge. It is important that you show yourself to be submissive.

Last on the list is the most unpredictable and arguably the most dangerous member of the Five to encounter while walking in the bush. Buffalo attacks, while rare, can be very severe. Read about a buffalo attack on acclaimed National Geographic photographers Dereck and Beverly Joubert.

Opinions on how to manage a buffalo attack vary among experts. However, all seem to agree that the animal is highly unpredictable, and the best survival tactic is to try to never find yourself in close walking proximity to a buffalo. Everyone also agrees that you should get out of the way.

“If a buffalo is charging, run away or lie on the ground”, says walking guide Amos Disho. “If it sees you climbing a tree, it will just stay there underneath and wait for you. Another option is to take a curve a stand behind a big termite mound. Both the big dagga boys and breeding herds can be dangerous. You always need to stay aware!”

Jakes Tembwe, the head guide at Jao Camp, explains that, “Traditionally in Botswana there is a belief that buffalo cannot turn left when charging. I believe that it could be a natural reflex of theirs to dip their horns down and towards the right and charge in that direction. Therefore, if you are ever charged by a buffalo, run to the left. You never know, it could save your life.”

There are a few other animals, far more dangerous than the Big Five. While they are not included on the list, they certainly should be. Hippos are of course a serious danger and are highly unpredictable. Another serious threat are crocodiles. Snakes could also arguably be included on the list. If you are interested in learning how to deal with hippos and crocodiles, let us know in the comments below and we’ll write a separate article.

If you’re interested in viewing any of the Big Five in person, let us know and we’ll show you where to find them. And remember. If you are on a professional safari, the chance of ever being attacked by a wild animal is incredibly small.

The international New Big 5 project (supported by more than 100 photographers, conservationists and wildlife lovers, including Dr Jane Goodall, Ami Vitale and Steve McCurry) is looking for the next Big Five -one that isn’t based on hunting.

Get the kids involved and ask them to choose their favourite animals. They will learn about Africa’s lesser-known species when voting on www.newbig5.com for the five creatures they want to see on safari.